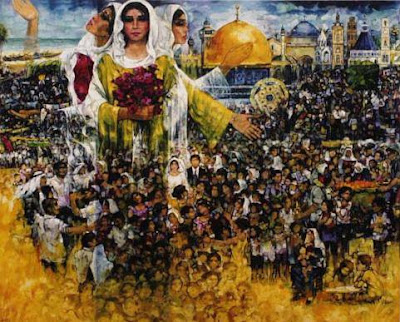 Palestinians are increasingly rejecting the crumbs of a two-state solution in favour of justice for all in a single state, Palestine

"......Qurei's incertitude about negotiations is drawing the ire of a growing sector of Palestinian intellectuals, encompassing elites from across the Palestinian political and ideological spectrum. This week, the Palestine One State Forum formulated a manifesto for the one-state solution, which calls for the creation of a unitary democratic state in all of mandatory Palestine from the Mediterranean to the River Jordan, and where Israelis and Palestinians would live as equal citizens.

- Palestine: The historical land of Palestine is the patrimony and motherland of the Palestinian people which in the context of a durable and comprehensive settlement would accept Israelis as equal citizens in a unitary democratic state.

- The right of return: Every Palestinian forced to flee his homeland (Israel proper) has an inalienable right to return as well as receive compensation and reparations for the psychological, economic and social losses he or she incurred.

- Zionism: Zionism is an exclusionary ideology and part of the international colonialist movement, which created and consolidated a racist state for Jews at the expense of the Palestinian people, resulting in the murder and expulsion of over half the Palestinians. Hence, we see that this ideology must be declared illegal and the political infrastructure based on it dismantled.

- One state for all: The creation of one state in historical Palestine is the most just, realistic, moral and humane solution of the Palestinian question which would guarantee peace and stability in the region. The creation of a unitary democratic state encompassing Israelis currently living in Israel and Palestinians, on the basis of equality as citizens and justice for all regardless of religion, race or sex, is the ideal way of resolving this conflict that has been raging since the outset of the 20th century.

- Historical reconciliation: The one-state solution would serve as the beginning of a historical reconciliation between Israelis and Palestinians that would erase the destructive effects of decades of occupation and colonisation. However, the process of reconciliation would have to be preceded by genuine acknowledgement of and apology by Israel for the historical injustices and losses inflicted on the Palestinian people. Moreover, Israel along with the international community would have to compensate the Palestinians for their suffering and losses.

- This vision requires the concerted efforts of the Palestinian people everywhere as well as the efforts of peace-loving Israelis and Jews and all men and women of good will around the world.

Such ideas are anathema for Israel, Zionism and the vast bulk of Jews, since they imply the ultimate dismantling of Zionism and the creation of a bi-national state where Palestinians would eventually have a numerical majority. They also represent a jolt to collective Palestinian thinking, long inured in the idea of Palestinian statehood.

But as Qurei pointed out, the one-state solution will become the Palestinian option not as a matter of choice, but rather because all other alternatives have been effaced. Continued Israeli settlement expansion in the West Bank, coupled with shrinking political prospects for a viable Palestinian state, is already presenting Palestinians with a dilemma, namely to face national dissolution (i.e. the Jordanian option in the West Bank and the Egyptian option in the Gaza Strip), or embark on a lengthy re- evaluation towards adopting the one-state solution........"
Posted by Tony at 5:25 AM