Because The Pharaoh Has No Balls...... 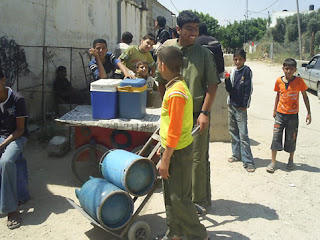 "As the Israeli siege on the Gaza Strip enters its 11th month, the population's living conditions further deteriorate, with scores of people in different parts of the coastal region lining up in front of gas stations to receive provisions of cooking gas, a scarce commodity over the past four weeks......

Since June of last year, following the democratically-elected Hamas' routing of Fatah forces, Israel imposed a crippling closure on the Gaza Strip and in October began to cut off essential supplies like fuel and food items. In January of this year, it further tightened its measures. Israel says that its actions are meant to stop the firing of homemade rockets onto nearby Israeli towns.
Israel recently blamed Hamas for the fuel and cooking gas crisis, saying that the party manufactured the crisis by refusing fuel and gas shipments that Israel sends through the Nahal Oz fuel terminal in eastern Gaza. Israel closed the terminal almost four weeks ago, in the wake of a cross-border attack that claimed the lives of two Israelis.

But Mahmoud al-Khozendar, the deputy-director of Gaza's Petrol Station Owners Association, refuted the Israeli claims, saying that no effort was spared to alleviate the humanitarian burden caused by the siege.

"This is a big lie, because in the terminal of Nahal Oz, there is a space for 900 tons of liquid petrol gas, but they send nothing. Our stations do not stop them from bringing gas, but they send nothing. Also, we have already withdrawn all fuel from Nahal Oz, and the Israeli people know that there is nothing in Nahal Oz and they can send [fuel], but up until now they haven't sent a liter of gasoline, diesel or cooking gas."......

Late January of this year Israeli Prime Minister stated that "We will not let the residents of Gaza lead a comfortable and pleasant life" so long as rockets are fired from the Strip, adding, "As far as I am concerned, all of Gaza's residents can walk," referring the collective punishment measures imposed by Israel on the people of Gaza.

Such is Israel's cynical treatment of Gaza, where 80 percent of the population depend on humanitarian food aid and anemia amongst children is pervasive and the health care system is on the verge of collapse."
Posted by Tony at 4:24 AM