Remembering 1948 and looking to the future 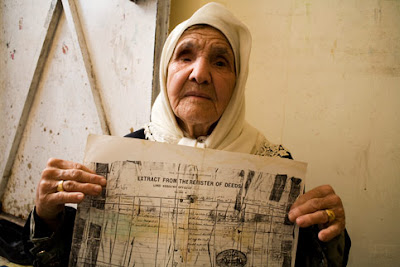 "......As the noted Israeli historian and staunch Zionist Benny Morris put it in 2004, "a Jewish state would not have come into being without the uprooting of 700,000 Palestinians. Therefore it was necessary to uproot them." He went on, "there are circumstances in history that justify ethnic cleansing."

But if one is not prepared to openly justify ethnic cleansing, there's only two real options: to deny history and take comfort in an airbrushed story that paints Israelis as brave, divinely inspired pioneers in a desert devoid of indigenous people and beset by external enemies, or to own up to the consequences and support the enormous redress needed to bring justice and peace......

Over 80 percent of the Palestinians now besieged and starved in the Gaza Strip are refugees from towns now in Israel. But what Palestinians could never be forced to part with -- and this we do celebrate -- is our attachment to our homeland and the determination to see justice done.

Palestinians all over the world are commemorating the start of our ongoing tragedy, but we are also looking forward. We are at an important turning point, where two things are happening at once. First, despite ritual declarations of international support, the prospect of a two-state solution has all but disappeared as Palestinians in the West Bank and Gaza Strip are caged into walled reservations by growing Israeli settlements and settler-only roads -- a situation that resembles the bantustans of apartheid South Africa.

Official projections show that by 2025, Palestinians, due to their much higher birth rate, will exceed Israeli Jews in the country by two million and though few in the international community have woken up to this reality, a surgical separation between these populations is impossible.

Israeli leaders understand what they are up against; Prime Minister Ehud Olmert said last November: "If the day comes when the two-state solution collapses, and we face a South African-style struggle for equal voting rights, then, as soon as that happens, the State of Israel is finished."

This struggle has already begun as more and more Palestinians, recognizing that statehood is unrealistic, debate and adopt the one-state solution, offering Israelis and Palestinians equal rights in the land they share. Last year, I was part of a group of Palestinians, Israelis and others who published the "One State Declaration." Inspired partly by South Africa's Freedom Charter, we set out principles for a common future in a single democratic state. Most Israelis, unsurprisingly, recoil at comparisons with apartheid South Africa. The good news for them is that the end of apartheid did not bring about the disaster many feared. Rather, it was a new dawn for all the people of the country."
Posted by Tony at 4:38 AM