'We are almost dead. We have no money, nothing' 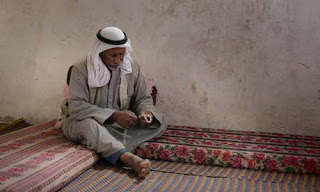 In the third part of our series on Gaza, Rory McCarthy talks to Ahmad Abu Me'tiq, who lost his wife and four of his children in an Israeli air strike

".......Abu Me'tiq, 70, said he had received no direct apology from the Israeli military and no offer of compensation for the loss of his wife Meyasar, 40, and his children Rudeina, six; Salah, four; Hana, three; and year-old Mes'id. Their deaths add to the growing and striking toll of children killed in the conflict in Gaza. This year alone at least 44 Palestinian children have been killed, according to a count at the end of April by the Palestinian Centre for Human Rights. The UN has put the figure at 53 children dead and 177 children injured so far this year.

Despite talks about a ceasefire the death toll on both sides continues to rise. At least 312 Palestinians, more than half civilians, have been killed this year, according to the Palestinian Centre for Human Rights. On the Israeli side six soldiers and six civilians have died......"
Posted by Tony at 4:08 AM