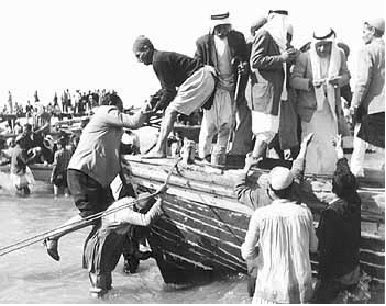 Photograph: Palestinians leaving Jaffa during the ethnic cleansing of 1948

"The war that began in 1948 to purge Jaffa of its Arab residents has never ended and continues to this day. In 1948 it was waged by force, and today they use legal and economic means. The state claims that these are the rules of the market, in full knowledge that they will work against the Arab population."
-- Attorney Hisham Shabaita, a social activist and Jaffa resident

"......According to the Palestinian residents, however, the issuing of these orders actually reflects a desire to evict them from the neighborhood, which in recent years has become a magnet for wealthy Jewish buyers. They believe that the issuing of the eviction orders cannot be divorced from a process terms the "development of Jaffa" by the Tel Aviv Municipality. This process, which is currently at its peak, actually amounts to a plan to "judaize" Jaffa, i.e. to attract as many Jewish residents as possible to the area, which is currently perceived by the Jewish public as an "Arab" city -- despite the fact that, in statistical terms, this is inaccurate.......

In practice, the "development" of Jaffa has resulted in a growing number of Arab residents leaving the area as real estate prices have soared following the development process. Conversely, a growing number of prosperous Jewish residents have moved into the neighborhood. The local Palestinian residents have good cause to believe that this was the original intention behind the program. Those involved must have been aware that the development of the area would lead to a rise in real estate prices, and that this would eventually leave the Palestinian residents with no choice but to leave the area. Attorney Hisham Shabaita, a social activist and Jaffa resident who is employed at the Law Clinic of Tel Aviv University, commented: "The state claims that these are the rules of the market, in full knowledge that they will work against the Arab population."

This report documents the danger of eviction facing the Palestinian residents of the Ajami neighborhood in Jaffa and reveals the true motives behind this process."

***
A Comment: The Ajami district in Jaffa is where I was born in 1945. My family was ethnically cleansed, just like the people you see in the photo above, from their home in Jaffa.
Posted by Tony at 11:11 AM