'Abbas must stand by his decision' 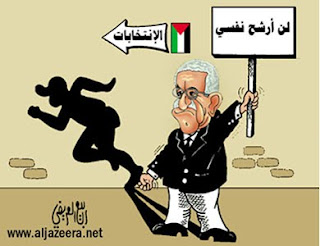 NOTE: I don't agree with several of the opinions expressed in this article, but it is worth reading.

(Left: The sign reads, "I am not running." The shadow says otherwise)

".....The man who believed the most among Palestinians in the Israeli-Palestinian negotiations, should step down even if elections, due to be held in January, are postponed.

This is not about Abbas' credibility but about his responsibility......

The last blow, however, came when Hillary Clinton, the US secretary of state, informed Abbas, that Washington wanted not only an immediate resumption of negotiations without a freeze on Israeli settlement building, but that East Jerusalem would be excluded from any discussion on settlement expansion.

A member of the Fatah central committee told this writer that Clinton informed Abbas that nine Arab governments had assured her of their acceptance of the US position on dropping the settlement freeze as a precondition for the resumption of negotiations.

"That was it for Abbas, who felt betrayed by Arab governments who agree with Washington and then accuse him directly or indirectly of selling out Palestinian rights," the Fatah official said.

In the end - even though Abbas' account is plausible - it was and remains his responsibility, first and foremost, to safeguard Palestinian rights.

Thus by stepping down, Abbas is admitting the failure of the 'peace process' and withdrawing Palestinian cover for Israel's continued occupation.

As many analysts - both supporters and opponents of Abbas - agree, the veteran Fatah leader has a chance to make an honorable exit.

But more importantly, and urgently, he has a duty to expose the American-Israeli scam to push the Palestinians to surrender in the name of 'peace'.

Abbas should not budge on this. It is a matter of assuming responsibility. "
Posted by Tony at 10:21 AM