Palestinians tear down chunk of wall 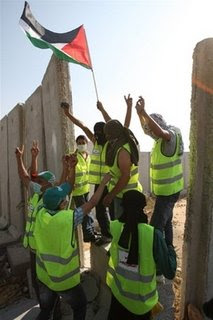 "RAMALLAH, West Bank (AFP) – Palestinians tore down a chunk of Israel's West Bank separation barrier on Monday in a protest staged to coincide with the 20th anniversary of the day the Berlin Wall came down.

A truck was used to pull down the wall section to the cheers of an estimated 150 Palestinian activists and foreign supporters near the Qalandia refugee camp just outside Ramallah.

Israeli troops used teargas and stun grenades in a brief clash with stone-throwing Palestinians who then dispersed.

"Today is the 20th anniversary of the fall of the Berlin Wall and marks the first day of a week of resistance to the apartheid wall in Palestine and around the globe," the Stop the Wall campaign said in a statement....."

Watch Video Clip Here.
Posted by Tony at 3:49 AM