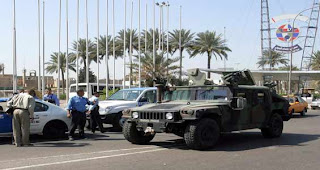 "The ten-day Baghdad International Fair opened its doors for the 36th time on November 1.

Featuring exhibits from major international companies, the trade fair was held annually from 1964 until the 2003 US-led invasion. It resumed in 2007.

However, a change to the fair's charter this year has angered many Iraqis.

The Iraqi government has dropped an article from the charter which obliges participating companies to prove they do not have trade links with Israel.

A memo from the Iraqi ministry of foreign affairs on October 7, alerted foreign embassies to the decision to drop article 45......."
Posted by Tony at 2:48 AM