The Rabbit is Always Good for a Laugh....Assad Says Resistance Forms Core of Syrian Policy 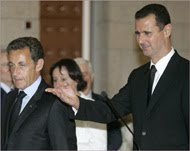 "11/11/2009 Syrian President Bashar al-Assad said on Wednesday that Syria was not setting conditions on making peace with Israel, but that it did have rights that must be restored, the official Syrian Arab News Agency (SANA) reported.

"Resistance (to Israeli occupation) forms the core of our policy, both in the past and in the future.[ That is a good one, Mr. Rabbit, tell us some more fiction!] We do not put forward conditions on making peace, but we do have rights that we will not renounce," he told a meeting of Arab political parties.

"If we are strong we will achieve the peace we seek. Resistance is at the heart of the new Middle East we have begun to build," Assad said......"

" DAMASCUS, Nov. 12 (Xinhua) -- Syrian President Bashar al-Assad is scheduled to pay a two-day work visit to France on Thursday, during which he will meet with his French counterpart Nicolas Sarkozy and other French officials, the official SANA news agency reported.....

Sarkozy added that the talks with Assad will deal with the Middle East peace process and the situation in Iraq and Lebanon.

In a statement to SANA, French Ambassador to Syria Eric Chevallier said Assad's visit to France is very important, "it paves the way for a new era of bilateral relations in light of the common will to give a new momentum to the Syrian-French relations, based on historic roots."....."

The Rabbit was apparently summoned by Sarkozy who wants to follow up his discussions with Netanyahu, just concluded in Paris.
Posted by Tony at 9:55 AM