In His Capacity as the Agent of Zion, the Pharaoh asks Miles of Smiles aid convoy to receive Israel’s approval to enter Gaza! 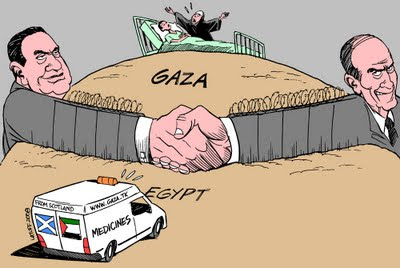 Spokesman Berawi explained that Ibrahim Siddiqi, the director of Port Said and El-Arish ports told them that the Israeli occupation authority (IOA) must approve the lists of the participants in the convoy and the humanitarian aid before unloading the cargos from the ships which have been docking in El-Arish port since last Thursday.

The spokesman pointed out that these new Egyptian restrictions were imposed after five days of waiting in El-Arish port at the pretext that there were other ships unloading goods at the port and after detaining the convoy at Port Said for 23 days.

The spokesman called on the Egyptian leadership to put an end to this long suffering experienced by dozens of peace activists from nine European countries.

The Egyptian authorities had refused to allow the convoy of Miles of Smiles, which was detained for about a month in Port Said, to enter Gaza by land and insisted it unloads its shipments by sea in El-Arish port before allowing it to enter Gaza as Egyptian officials earlier promised. 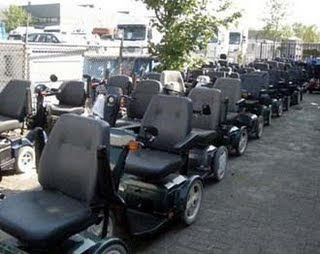 The convoy, which is organized by a European organization called partners for peace and development, is composed of minibuses loaded with medical assistance and wheelchairs in addition to a number of ambulances."
Posted by Tony at 4:30 AM