Whatever lies ahead after Abbas's notification of not seeking the Palestinian presidency again, the status quo ante is over for good

By Khaled Amayreh in Ramallah
From Al-Ahram Weekly

".....Hence one Fatah leader in Ramallah questioned the "wisdom" of appointing a successor to Abbas under the current political conditions. "What would any potential successor to Abbas be able to do? Abbas has given the Americans and Israelis all they want. He went to the greatest extent possible in order to demonstrate Palestinian desire for peace. But look how they have treated him." 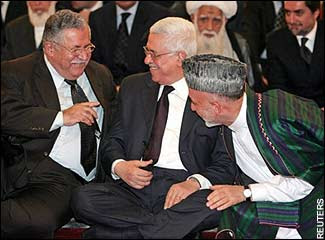 The source added, on condition of anonymity: "They [America and Israel] wanted Abbas to be a full-fledged collaborator working against the interests of his own people. They were not willing to accept a dignified Palestinian partner. They didn't want partners, they only wanted to see collaborators, such as the current rulers of Afghanistan and Iraq.".....

Some pundits suggest that the Obama administration might seek "another" Palestinian Karzai -- a strongman like Mohamed Dahlan. However, it is near certain that any meddling from Washington would cause Fatah to implode from within with such a new leader being viewed by the majority of Palestinians as an American agent. Another possibility is that the US would further boost the status of Prime Minister Salam Fayyad, enabling him to function as de facto Palestinian leader in lieu of Abbas. But this prospect, too, is fraught with uncertainty because Fayyad is bereft of a popular base despite attempts to build one......"
Posted by Tony at 4:35 AM