Chavez: US provoking all-out war in S. America. Now That is a ,"Change We Can Believe in!" 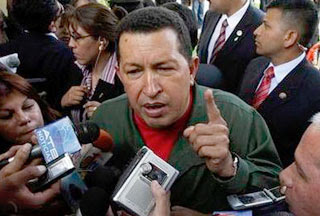 "President Hugo Chavez has threatened an all-out war in South America should the US want to provoke Colombia to launch an armed conflict in the region.

Chavez said Venezuela could end up going to war with Colombia, warning that if a conflict broke out "it could extend throughout the whole continent."

The anti-US leader ordered the military to prepare for a possible war, addressing President Barack Obama to be cautious about any move in the region.

"Don't make a mistake, Mr. Obama, by ordering an attack against Venezuela by way of Colombia," Chavez said during his weekly television and radio program Sunday.....

A recent military agreement between the US and Colombia that gives American troops greater access to military bases of Colombia has sparked controversy in the region......"
Posted by Tony at 3:05 AM