Myths of Our Time

"It is conventional wisdom that it was the draft that ended the Vietnam war. According to this explanation, cowardly college students subject to the draft and their unpatriotic families, forced an end to the war. This is Karl Marx’s explanation. Material interests, not empty morality, are said to have brought the war to an end. 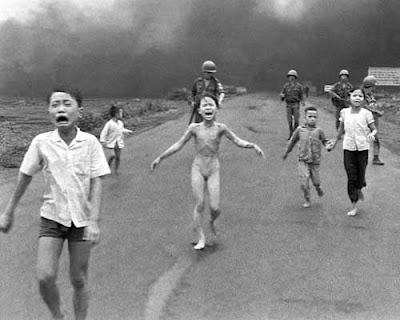 The fact that in those days the US still had an independent media of sorts that sometimes framed the war in moral terms is ignored. Are we sure, for example, that the film of the naked little girl running in terror down the road burning with napalm was ineffectual in arousing moral opposition to the war? Are we certain that it wasn’t an aroused moral conscience that brought about the end of the war but was college students’ fears for their lives and limbs?......"
Posted by Tony at 4:21 AM