The Disastrous Presidency of Mahmoud Abbas 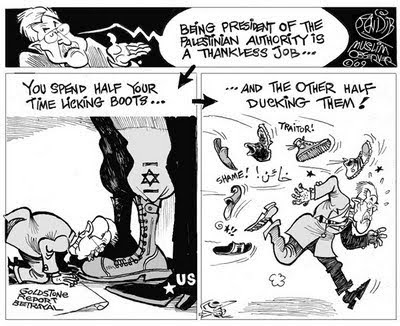 Is It Really Over?

"After five long years, and at great expense to a state hoped-to-be-called Palestine, Palestinian Authority President Mahmoud Abbas has finally realized that subservience to the United States and Israel pays little in dividends. Indeed, what he has done to the cause of Palestine, the unity of its people, and the advancement of their rights has been nothing short of unmitigated disaster......

Symbolic of his behavior over the past five years, Abbas’ stance on the Goldstone Report brought to the fore the embarrassment and shame many Palestinians have long felt over his actions. Capitulation to Presidents Bush and Obama, and Israeli Prime Ministers Sharon, Olmert and Netanyahu, has only led to the unabated expropriation of Palestinian land and progressively worse relations between the rival elected and appointed governments.

Though it appears doubtful the quisling Abbas will actually resign, its mere suggestion should still be cause for celebration among Palestinians. Even if it ultimately does not come to pass – at least for now – let them rejoice."
Posted by Tony at 8:59 AM