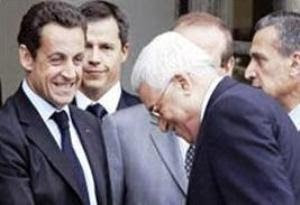 He did not elaborate, but said Sarkozy had shared details of his meeting with Netanyahu and that the two agreed to talk again in a few days.

Another senior Palestinian official told AFP on condition of anonymity that among the topics discussed was the idea of organizing a Middle East peace conference in Moscow [So the "peace" circus' next stop is Moscow?], an idea Russia has been pushing for months.

Netanyahu returned to Israel early on Thursday after meeting with President Barack Obama in Washington and Sarkozy in Paris."
Posted by Tony at 9:37 AM