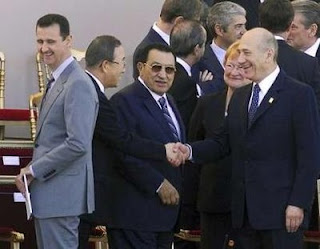 "Syrian President Bashar Assad warned on Monday that if the Golan Heights are not returned peacefully – Syria will turn to resistance. Speaking at an economic forum of the Organization of Islamic Conference in Istanbul, Assad said, "The failure of negotiations towards the full restoration of rights automatically means resistance is the alternative solution." According to Assad, "Resisting the occupation is a national duty....."

COMMENT:
This is the same "leader" who, just two days ago, was urging Turkey to strengthen its ties with Israel, so it could be a better mediator with Syria.

This is the same "leader" who was repeatedly humiliated when both the US and Israel bombed and destroyed targets and killed scores of Syrians deep inside Syria. The Israeli jets that bombed their target near Deir El-Zur, deep inside Syria, flew over Turkey first, before entering Syria. Now that is the Turkish-Israeli military alliance which the "dear leader" of Syria wants to strengthen.