Does Obama Have a Mideast Plan B? 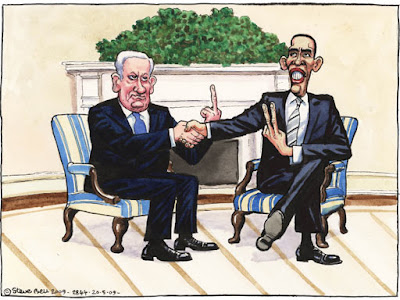 "It’s hardly surprising that President Barack Obama chose to schedule a White House visit by Israel’s Prime Minister Benjamin Netanyahu in the dead of night on Monday, because right now Obama has little to show for his 10-month effort to revive a Middle East peace process. The Israeli leader’s refusal to abide by Washington’s demand for a complete freeze of settlement construction in the West Bank and East Jerusalem — and the Palestinians’ refusal to enter talks without one — has left the Obama Administration’s plans in tatters, with Palestinian Authority (PA) President Mahmoud Abbas threatening to resign and pull the plug on the PA and the peace process of which it forms a part......"
Posted by Tony at 6:33 AM