The Annexation of Colombia to the US 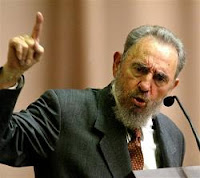 "Anyone with some information can immediately see that the sweetened ‘Complementation Agreement for Defense and Security Cooperation and Technical Assistance between the Governments of Colombia and the United States’ signed on October 30, and made public in the evening of November 2, amounts to the annexation of Colombia to the United States.

The agreement puts theoreticians and politicians in a predicament. It wouldn’t be honest to keep silence now and speak later on sovereignty, democracy, human rights, freedom of opinion and other delights, when a country is being devoured by the empire as easy as lizards catch flies. This is the Colombian people; a self-sacrificing, industrious and combative people. I looked up in the hefty document for a digestible justification and I found none whatsoever......"
Posted by Tony at 6:30 AM