Listen Up Everyone: Habila is Talking Strategy! 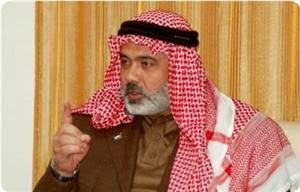 "GAZA, (PIC)-- Ismail Haneyya, the PA premier in Gaza Strip, has called for the formulation of a pan-Arab strategy that would restore Arab rights in general and Palestinian rights in particular. [COMMENT: Is this man for real? He sounds like a voice from 1909, not 2009.]

He said during a meeting with a Jordanian medical delegation on Wednesday that such a strategy should be adopted to confront the Israeli occupation's schemes and its procrastination and the American administration's bias in favor of occupation.

Haneyya said that his government and his Hamas Movement rejects the notion of the alternative homeland, stressing the importance of security and stability in all Arab countries especially Jordan, Egypt, Saudi Arabia and Yemen in view of its positive reflection on the Palestine cause.

The premier hailed the Jordanian role in serving the Aqsa Mosque and asked for more efforts to lift the siege on the Gaza Strip and reconstructing the devastated buildings.

He underlined that national reconciliation was the best means of retaliating to the Israeli obstinacy."
Posted by Tony at 10:16 AM