The Winds of Change Die Down 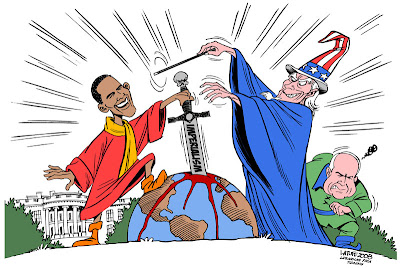 It was all hot air to begin with

"I have to feel sorry for my progressive friends, of whom there are a few, who had so much hope for the new administration, and were convinced that the election of Barack Obama would lead to a significant shift in American foreign policy. One can hardly blame them for their election night elation: after all, eight years of relentless militarism and knee-jerk belligerence were finally over, and a new day was dawning – or so they thought.

Since it would be in dubious taste to say "I told you so," I’ll refrain and simply note the facts: the Obama administration has been a major disappointment to self-described liberals and Democratic party activists (outside the unions) on a wide range of issues, including not just foreign policy but also civil liberties and healthcare "reform."........

This last is the core reason why the warlords of Washington will never relinquish their Afghan domain voluntarily, without being militarily defeated and driven out as they were in Vietnam. The Obama administration is specifically committed to the idea that the US government can and should determine what is best not only for its own citizens but for the inhabitants of the rest of the world. Washington’s only god is power, and their every act is an act of worship at its altar. Which is why, in spite of whatever good intentions they might have started out with, in the end the Obama-ites are no different from their Republican predecessors – and the sooner "progressives" and other well-meaning fans of this administration reconcile themselves to this fact, the more likely they are to understand current events."
Posted by Tony at 4:10 AM