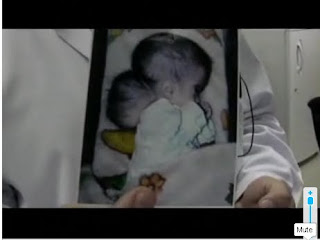 "Doctors in Iraq's war-ravaged enclave of Falluja are dealing with up to 15 times as many chronic deformities in infants and a spike in early life cancers that may be linked to toxic materials left over from the fighting.

The extraordinary rise in birth defects has crystallised over recent months as specialists working in Falluja's over-stretched health system have started compiling detailed clinical records of all babies born.

Neurologists and obstetricians in the city interviewed by the Guardian say the rise in birth defects – which include a baby born with two heads, babies with multiple tumours, and others with nervous system problems - are unprecedented and at present unexplainable.....

After several years of speculation and anecdotal evidence, a picture of a highly disturbing phenomenon in one of Iraq's most battered areas has now taken shape. Previously all miscarried babies, including those with birth defects or infants who were not given ongoing care, were not listed as abnormal cases....

Falluja was the scene of the only two setpiece battles that followed the US-led invasion. Twice in 2004, US marines and infantry units were engaged in heavy fighting with Sunni militia groups who had aligned with former Ba'athists and Iraqi army elements.

The first battle was fought to find those responsible for the deaths of four Blackwater private security contractors working for the US. The city was bombarded heavily by American artillery and fighter jets. Controversial weaponry was used, including white phosphorus, which the US government admitted deploying......."

Watch Video: Children of Falluja
Posted by Tony at 4:24 PM