"....However, two decades later, walls of separation still exist throughout the world. Israel's wall in the West Bank is much bigger than the Berlin wall ever was, as it encloses more than two million Palestinians inside the occupied West Bank. This wall separates Palestinians from their families, land, natural resources and communities..... 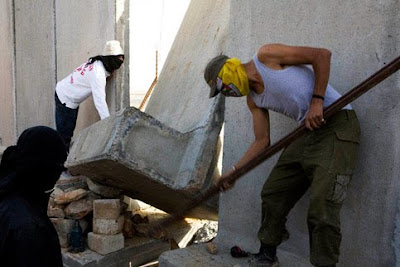 In a symbolic action, the protestors in Nilin on 6 November were able to knock down a section of the wall before the Israeli army arrived and fired tear gas at the crowd.....

In a similar action on 9 November dubbed "We are going to Jerusalem," near the Qalandiya refugee camp outside Ramallah, hundreds of Palestinians along with dozens of internationals attached a rope to the wall as they used a truck to tear down one of the concrete slabs. As they demonstrated over the downed segment of the wall, Israeli soldiers arrived firing teargas and rubber bullets at the crowd. The below images show the action...... 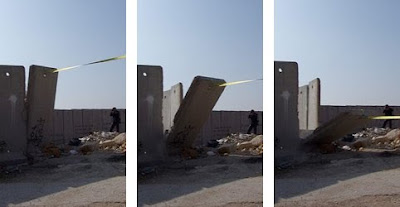