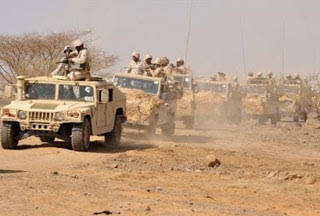 (Left: No these are not US occupation troops in Iraq, nor IOF entering Gaza; these are Royal troops entering Yemen)

"Yemeni Shia Houthi fighters have released recent footage of clashes with the Saudi military at the two countries' joint border.

The video shows the seizure of Saudi army vehicles by the fighters. It also shows Saudi soldiers fleeing the scene of battles as Houthi fighters open fire on them.

While Riyadh says that its offensive targeted Houthi positions on 'Saudi territory', the fighters say Yemeni villages, far from the battlefield, were being bombarded.

On several occasions, the Saudi air force has also attacked the areas of al-Malahaid and the border region of Jabal al-Dukhan with white phosphorous bombs, the fighters say. Their attacks have killed and wounded several people.

The Houthis say they've captured an unspecified number of Saudi troops inside the Yemeni territory in response to Saudi attacks on their positions and villages....."
Posted by Tony at 2:59 AM