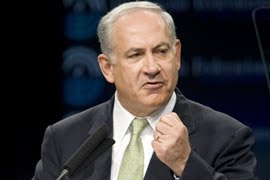 "When Israeli Prime Minister Benjamin Netanyahu spoke Monday at the Annual Conference of the United Jewish Federations in Washington, DC, he was interrupted by Code Pink peace activist Midge Potts stood up with a banner that said “End the Siege of Gaza”.

She shouted “Stop the blockade of Gaza, Shame on you, Netanyahu”, and was dragged out of the meeting by security guards.

Midge Potts is a navy veteran who says she felt compelled to speak on behalf of Palestinians.

Today’s disruption of the Israeli Prime Minister’s speech is just one of a series of similar disruptions of speeches by Israeli officials in the US and Europe.

Activists like Midge Potts challenge Netanyahu’s characterization of the Israeli military as the “most moral army on earth”.

In disrupting Netanyahu’s speech, Midge Potts said that she hoped to send a message to the Palestinian people that there are Americans who believe in human rights for all and are determined to change the US government’s policy to reflect these values."

Click here to listen to audio interview with Midge Potts.
See Video Below: