Can Talks with Iran Lead to Obama's 'World without Nuclear Weapons'? 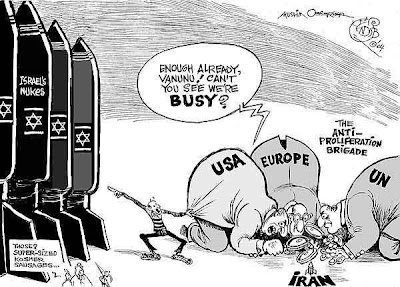 "......But there's already a powerful nuclear weapons arsenal in the Middle East, whose very existence is instigating a regional nuclear arms race, and undermining non-proliferation efforts. That arsenal belongs to one of the small group of outlaw countries that have refused even to sign the Non-Proliferation Treaty. Its arsenal is widely known, but not officially acknowledged, and the UN's nuclear watchdog agency has never been allowed to inspect the hundreds of high-density nuclear bombs.

That country is Israel. And Obama, so far, has accepted Israel's policy of "strategic ambiguity," in which Tel Aviv refuses to acknowledge its nuclear arsenal. Israel rejects a nuclear weapons-free zone, because it would mean having to open its nukes to immediate international inspection and then quickly getting rid of them. Other countries that built and tested nuclear weapons, such as India and Pakistan in 1998, faced serious U.S. sanctions. But the U.S. refuses to hold Israel accountable for its dangerous nuclear weapons......"
Posted by Tony at 7:02 AM