Abu Mazen Throws in the Towel 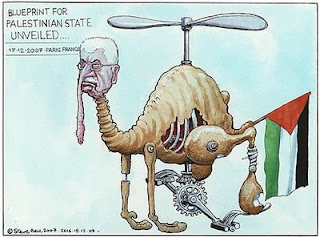 ".....Abu Mazen's step also puts Hamas in a delicate situation. What will happen to the Hamas regime in Gaza and its demand to be recognized as the legal government? Hamas has been playing a two-faced game. It exploited the Oslo Accords in order to participate in the elections of 2006, which brought it to power. Simultaneously, it has done its utmost to undermine these Accords. Hamas used the Palestinian parliament as an umbrella for its legitimacy as a political party, but its military wing acted separately to destroy the agreements that the parliament is based on. If the PA comes apart, what will happen to the Gaza Strip? Will Hamas establish an alternative Authority? Or will it return to its underground days and implement a scorched earth policy?

There remains the question as to why it was necessary to undergo all the deaths, the blockade, the wall, the settlements, the roadblocks, the unemployment, a civil war between Hamas and Fatah, and now the destruction in Gaza—in order to reach a point where the PA collapses. For there was never a justification for the PA's existence: that should have been obvious in the first place. Why has it taken so long to grasp the fact that the Oslo Accords could not lead to statehood, but merely perpetuated the Occupation? The answer seems simple enough: There are those within Fatah who gain from the perks of office. There is a thin, corrupt layer that has made itself rich on the backs of the people. For this reason we should not be surprised if a last-minute formula turns up once again to rescue the "peace" process. The existence of the PA, after all, isn't only a comfortable arrangement for Israel, but also a source of easy profit to all who make a living off this hollow apparatus, including the regime that is headed by Abu Mazen."
Posted by Tony at 6:19 AM