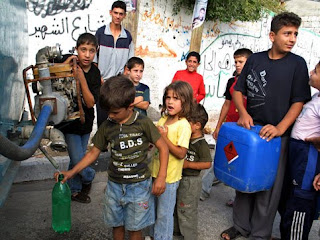 Adri Nieuwhof, The Electronic Intifada, 9 November 2009
(Adri Nieuwhof is a consultant and human rights advocate based in Switzerland)
"The management of Portuguese water company EPAL recently informed its workers about its collaboration with the Israeli national water company Mekorot on "water security issues." An EPAL intern who recently visited the occupied West Bank reacted to the news by informing colleagues about how Israel is depriving Palestinians from water, referring to Amnesty International's 27 October report on the situation. EPAL responded by sacking the intern within one hour.....

According to European law, EPAL has the power to exclude an economic operator from bidding for a public contract or to reject any such bid where it is found that the individual or organization has committed an act of "grave misconduct" in the course of its business of profession. Directive 2004/18/EC of the European Parliament and of the Council of 31 March 2004 on the coordination of procedures for the award of public works contracts, public supply contracts and public service contracts is explicit about this. Like other European companies supporting Israel's occupation, EPAL and its investors can expect increasing scrutiny and pressure to withdraw from agreements that undermine international law."
Posted by Tony at 4:37 AM