Behind Drone Issue in Yemen, a Struggle to Control Covert Ops 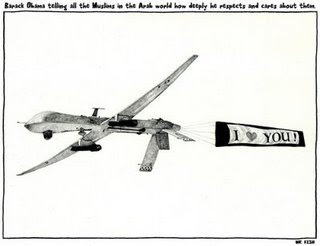 "WASHINGTON, Nov 10, 2010 (IPS) - The drone war that has been anticipated in Yemen for the last few months has been delayed by the failure of U.S. Special Operations Forces (SOF) to generate usable intelligence on al Qaeda there.

That failure has given the CIA a new argument for wresting control of the drone war in Yemen from the Joint Special Operations Command (JSOC) which now controls the drone assets in the country. But some key administration officials are resisting a CIA takeover of the war in Yemen, as reported by the Washington Post Nov. 7.

The struggle between the CIA's operations directorate and SOF officials over management of a drone war in Yemen has been a driving force in pushing the war against al Qaeda and affiliated organisations into many more countries – along with President Barack Obama's eagerness to show that he is doing more than his predecessor on terrorism....."
Posted by Tony at 7:07 AM