Egypt Cracks Down as U.S. Stands By 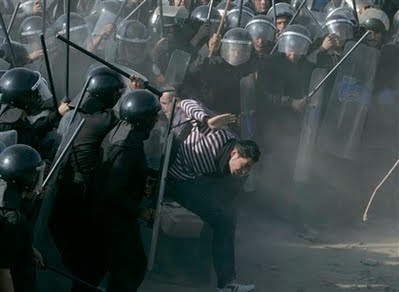 "NEW YORK, Nov 7, 2010 (IPS) - In the face of police brutality, crackdowns on political parties and media, and a host of other violations ahead of Egypt's Nov. 28 parliamentary election, human rights advocates are calling on President Barack Obama to use U.S. leverage to persuade Egypt to reform its electoral process, allow international monitors to assess the election, and conduct transparent and accountable balloting......

Samer Shehata, a professor of Arab politics at Georgetown University, minimises the importance of the U.S. pro- democracy programmes.

"The real issue is what - or what not - the White House and State Department are saying publicly, and privately to the Egyptian government, about the upcoming elections," he told IPS.

"The Obama administration is unfortunately not interested in pushing the sclerotic Mubarak regime (Mubarak is 82, in declining health and without a vice president) to display even mild respect for political freedoms, including free and fair elections," he said. "
Posted by Tony at 4:54 AM