Matthew Norman: How did this wastrel ever find his way to the White House? 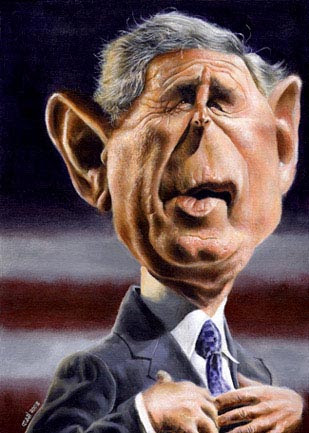 It takes a certain minimal intelligence for the truly dim to have a notion of their own dimness, but this is denied George Bush. He has the self-awareness of a bison

How could anyone in possession of a three-figure IQ (still a moot point with Bush) fail to see what a golden gift that image is to satirists? There he is, in the cartoon in my head, scooping up a couple of Cumberland sausages while following him, shovelling up the Augean Stable-sized steaming pile he left behind in the Oval Office, is Barack Obama at the wheel of an industrial digger.
The Independent
Posted by thankgodimatheist at 6:44 PM