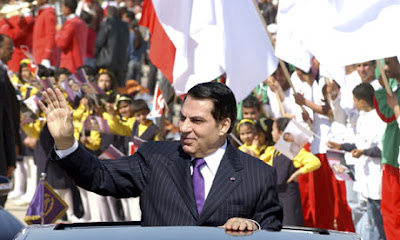 " I am standing in a cramped, three-room office in an unmarked building in central Tunis. I have been led here by Nejib Chebbi, the chairman of the Parti Démocrate Progressiste (PDP), the most credible opposition party in Tunisia. We have just finished lunch during which Chebbi discussed the week-long hunger strike he and Maya Jribi, the PDP secretary-general, had finished only the previous evening in protest at the government's attempt to block publication of the latest issue of the PDP's newspaper....

Since independence in 1956, Tunisia has been ruled by one party and two presidents – Habib Bourguiba and, since 1987, Zine el Abidine Ben Ali......

Today, foreign or domestic journalists who publish material that is seen as critical of the government quickly find themselves unable to work in the country. Similarly, Tunisians who join unapproved movements of any political shading are liable to find themselves followed by police and quietly dismissed from their job, while their family is harassed and they are perhaps thrown into jail or, worse, tortured.....

Nearly a decade after 9/11, the US and EU are still desperate to bring the Muslim world on side. Throughout this period, they have been courted by Arab autocrats who saw an opportunity to shore up support for their rule by promising to co-operate on security. Yet despite jumping into bed with these supposed friends, anti-western extremism has not demonstrably been lessened. Meanwhile, the Arab democrats eager to befriend us in places like Tunisia politely tell us they view our governments as hypocrites.

If we truly want to improve the brand image of the west in the Muslim world, we ought to consider seriously whether our engagement in such countries is genuinely supporting the best outcome for their populations......"
Posted by Tony at 3:44 AM