Israel Presses for a Tougher U.S. Line on Iran 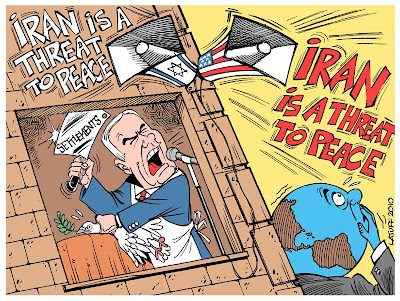 "The last time Israel's Prime Minister asked the U.S. to bomb the nuclear facilities of one of its enemies, he was rebuffed. "I cannot justify an attack on a sovereign nation unless my intelligence agencies stand up and say it's a weapons program," President George W. Bush says in his new memoir, Decision Points, that he told Ehud Olmert in response to the then Israeli Premier's request that he bomb a suspected nuclear reactor in Syria. And the CIA's assessment was that while the Syrian facility appeared to be a nuclear reactor under construction, it did not believe Damascus had a nuclear-weapons program. (Israel itself eventually bombed the facility.) Bush's rebuff of Olmert, however, hasn't deterred current Israeli Prime Minister Benjamin Netanyahu from making a similar request to President Barack Obama on Iran.....

It's already plain to see that being "soft on Tehran" will be a key trope used by Republicans aiming to prevent President Obama's re-election in 2012, and any attempt at engagement of any sort with Iran will likely bring relentless attacks on Capitol Hill. That will certainly suit the Israeli leadership, who not only want to see a more confrontational U.S. position on Iran, but who also came into office insisting that Iran's nuclear program, rather than peace with the Palestinians, should be Washington's priority in the Middle East."
Posted by Tony at 4:44 AM