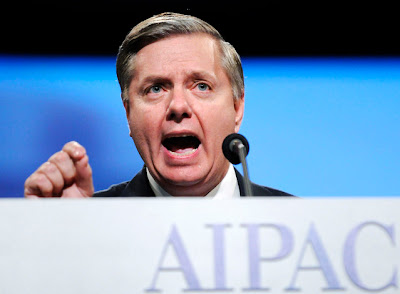 Sends ripples through an international audience in Halifax

"HALIFAX, Nova Scotia -- A U.S. lawmaker sent ripples through an international audience Saturday saying his country should be prepared to launch a military attack on Iran that would "neuter" the hard line regime......

Republican Sen. Lindsey Graham of South Carolina said Saturday his party would support military action against Iran that would destroy its ability to fight back while allowing its people to rise up.

Graham surprised attendees at the Halifax International Security Forum with his hawkish rhetoric, saying an attack could cripple Iran's nuclear program as well as its armed forces.....

Graham created the biggest buzz at the second annual security conference that MacKay is hosting in his home province. Graham serves on six senate committees, including armed services, homeland security and veterans' affairs. He also serves in the U.S. military as an active member of the Air Force reserves.

"Nobody would like to see the sanctions work any more than I would because I'm still in the military and I get to meet these young men and women on a regular basis and I know what it's been like for the last nine years," he told an audience of foreign politicians, diplomats and academics.