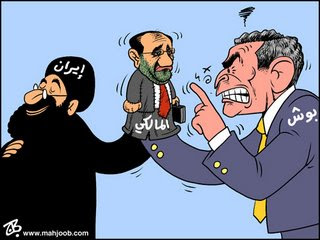 "The United States is facing a decisive political defeat in Iraq over the formation of a new government, as its influence in the country sinks lower than at any time since the invasion of 2003.

The increased power of Iran is expected to be underlined with a vote in parliament today in Baghdad to name the leadership after eight months of political stalemate during which political violence has continued throughout the country.

The US campaign to promote its favoured candidate, Iyad Allawi, as president appears to have failed spectacularly.....

Along with its ally, Syria, Iran has shown flexibility in dropping its earlier opposition to Mr Maliki and persuading the followers of the nationalist Shia cleric, Muqtada al-Sadr, who did well in the Iraqi election, to do the same. It thereby reunited the Shia coalition which, with the Kurds, has ruled Iraq since 2005. The only Shia party left out is the Islamic Supreme Council of Iraq, once seen as an Iranian pawn. "
Posted by Tony at 4:55 AM