Targeting Fun in the Gaza Strip 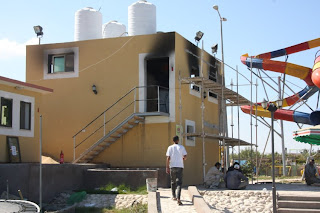 "For the few with money in the Gaza Strip, a new water park provided relief from monotony and widespread misery. Hamas, though, has now burned it down -- and sent a message that even the elite must conform to the Islamists' restrictive rules......

Rise of the Extremists

Given his past, Araj is surprised that Hamas targeted his water park with its new hard-line policies. Between 2006 and 2007, Araj served as the economics minister for the Hamas government. Although he isn't a member of Hamas, he has always cultivated close connections to those in power. "I thought I was one of the few people in Gaza that everyone got along with," he says.

He says that targeting of his water park comes due to the increased influence hard-liners have been able to gain for themselves within the government. "Unfortunately, it's the same as in any revolution," Araj says. "The extremists are pushing their way into leadership positions."

For months now, the new buzzwords in Gaza have been "Erdoganis" and "Talibanis": Hamas has split into two camps, say the political intelligentsia during their gatherings in cafés and living room. The moderate faction supposedly adheres to the ideas of Turkish Prime Minister Recep Tayyip Erdogan, advocating a democratic system with only a slight nod to Islam. The hard-liners, on the other hand, allegedly model themselves after the Taliban in Afghanistan and aspire to install a theocratic government.