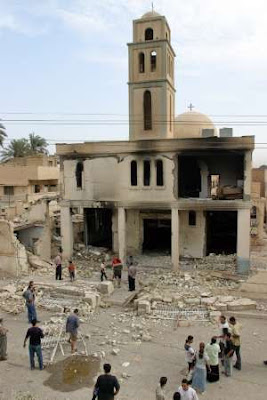 "When George W Bush sent the US into Iraq in 2003, he believed he would be replacing Saddam Hussein with a peaceful, pro-American Arab democracy that would naturally look to the Christian west for support. In reality, seven years on, it appears that he has instead created a highly radicalised pro-Iranian sectarian killing field, where most of the Iraqi Christian minority has been forced to flee abroad.....

Certainly, for the first time, that now looks like being a possibility in Iraq: last week Michael Youash, of the Iraq Sustainable Democracy Project, warned that in the near future "perhaps we'll find no Christians in Iraq". Given the overt Christian faith of the two architects of the invasion, Bush and Tony Blair, there is a tragic irony in the fact that their most lasting contribution to the region may well be to have created the environment that led to the destruction of Christianity in one of its ancient heartlands – something Arab, Mongol and Ottoman conquests all failed to pull off."
Posted by Tony at 4:45 AM