Behind an Israeli Strike in Gaza, Help from Egypt 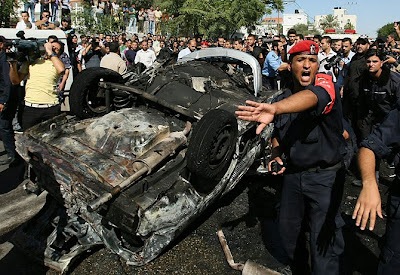 "The Nov. 3 assassination of Mohammad Namnam looked pretty much exactly like the fiery deaths of a lot of other Islamic militants in the Gaza Strip over the years. He was making his way in broad daylight through the tattered streets of Gaza City when his sedan turned into a fireball. The missile arrived from an Israeli helicopter hovering so far away that onlookers at first thought the explosion was a car bomb.

The death was not routine, however. Israel has refrained for months from assassination by missile, just as Hamas, the fundamentalist militant group that rules the Gaza Strip, has held back from launching homemade rockets into Israel. And the dead man was a senior operative not of Hamas but of another, more extreme militia called the Army of Islam......

But the most striking element of the operation was the source of the tip: Egyptian intelligence gleaned news of the plot from Army of Islam operatives captured earlier in the Sinai. Egyptian security forces work to interdict arms and explosives on smuggling routes that run across the vast expanse from Sudan to Gaza. But sharing the intelligence on Namnam with their Israeli counterparts marked a level of Egyptian cooperation not seen by the Jewish state in years. "Egypt is helping much more," a security source in the region tells TIME......"
Posted by Tony at 4:08 AM