CIA tortured to get 'inaccurate' info 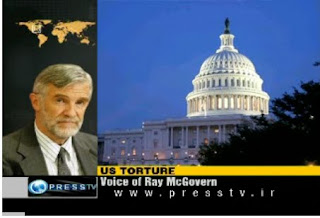 "The US Justice Department says CIA officials who have been accused of destroying videos showing torture of detainees are immune from prosecution.....

To discuss the issue further, Press TV conducted a phone interview with Ray McGovern who is a former CIA analyst.

Press TV: After two years of investigation, the Justice Department says they will not press for criminal charges, so why such an exhaustive probe was launched in the first place?

McGovern: Well, I think it is three years and it is a window-dressing. When you hear that evidence of torture has been destroyed, you cannot be seen to be doing nothing......

… They tortured people for a couple of reasons. One was, well you know that you cannot get accurate information from the torture. The head of Army Intelligence said that on the 6 of September 2006 when he said, “No good intelligence is ever going to come through harsh interrogation techniques.” History has shown that and the experience of the last five years, difficult years, also shows that. So number one: no accurate intelligence. So why do you torture? You know, to get inaccurate information. If you want to prove for example that there are ties between Iraq and Al-Qaeda, there is nothing that works better than torture and that is precisely what they did. Primary aim was to get somebody to admit the “ties" between Iraq and al-Qaeda, to allow the president and his underlings to say to the American people, Iraq was involved in 9/11 and that is why we have to attack Iraq.

The whole thing is unprecedented as to its duplicity, its lying and its consequences."
Posted by Tony at 3:35 AM