".....The US government and media are now demonising Awlaki, and probably exaggerating his influence, as the inspiration for attacks by focusing on Yemen as the new bastion of al-Qa'ida. But, as in Iraq, al-Qa'ida has strength mainly because it associates itself with groups already in opposition to the central government. In Yemen there is increasing dissent in the south, formerly the People's Democratic Republic of Yemen, which united with the Yemen Arab Republic in the north in 1990. The government in the capital, Sanaa, has every incentive to persuade the US to label its many domestic enemies as al-Qa'ida so it can obtain financial aid and arms, along with military and political support." 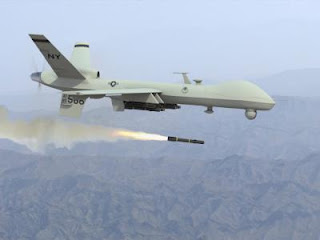 "The United States has deployed unmanned Predator drones in Yemen, claiming they are aimed at eradicating al-Qaeda militants, senior US officials say.

The Washington Post reported on Sunday that the drones have been patrolling the Yemeni skies for several months in search of al-Qaeda leaders and operatives allegedly hiding in the country....."
Posted by Tony at 3:55 AM