The great book robbery of 1948 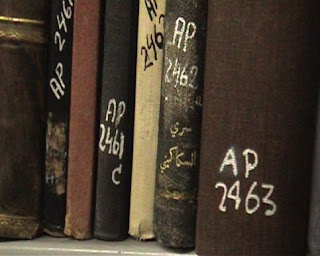 "A new documentary reveals a hidden chapter in the history of the Nakba -- the Palestinian expulsion and flight at the hands of Zionist militias as Israel was established in 1948 -- which saw the systematic looting of more than 60,000 Palestinian books by Israeli forces and the attempted destruction of Palestinian culture.....

This untold story of the Nakba has remained hidden over the years until, by complete accident, Israeli graduate student Gish Amit stumbled across archives documenting the systematic looting of Palestinian books.....

The cultural destruction that occurred during the Nakba has remained a relatively marginalized aspect of the wider narrative of Palestinian suffering. It is seen as a small, irrelevant detail which affected a small minority of urban elites living in the cities, as apposed to the complete annihilation of Palestinian villages that affected a large portion of the Palestinian population.
"What you need to understand is that the Palestinian loss was so massive that such details were overwhelmed," says Karmi, who now lives and works as a university lecturer in the UK. She is also the author of several books including In Search of Fatima, a memoir of her family's experience during the Nakba. "People lost their homes, their lives, their land and I guess the loss of books in the homes of a small Palestinian elite would not have been high up on the scale. Now that all these years have passed since the Nakba, these details are starting to emerge and their importance is being acknowledged."
In fact film director Benny Brunner, Arjan El Fassed (co-founder of The Electronic Intifada) and others have made it their task to highlight the state-sponsored looting of 1948-49. The Great Book Robbery is a project and documentary in the making which hopes to expose the untold story of the book looting and help Palestinians reclaim their cultural heritage and even revive it (a brief video is available on the film website).
Brunner, a Dutch and Israeli citizen who has worked on various films related to Israel and the Palestinians, says "The story is really significant because it's more than the fact that 60,000 books were looted -- it's about the destruction of a culture. That's the real impact of this event; that's the real significance and I think that needs to be communicated. And if possible, efforts have to be put in resurrecting the lost cultural world that was destroyed in 1948." ......"
Posted by Tony at 4:47 AM