Christianity's place in the Middle East 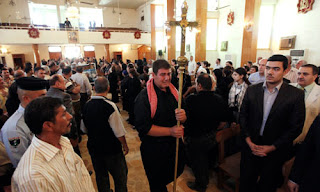 "The brutal attack on a Baghdad church by al-Qaida in Iraq last week, together with subsequent attacks this week, has prompted a renewed interest in the declining numbers of Christians in the Arab world. While some commentators have limited their views to the tragedy unfolding in Iraq, others have generalised about the doomed fate of Christians across the region.
One article in Foreign Policy went so far as to suggest the church attack might spell "the end of Christianity in the Middle East" altogether. Yet such generalisations play into the hands of radicals wanting to perpetuate the clash-of-civilisations myth. Though anti-Christian feeling may be rising on the extreme radical fringe of some Arab societies such as Iraq, this should not obscure the harmony that has long been a characteristic of other parts of the Arab world......

Christian numbers may be diminishing and the radical fringe may sadly be gaining the upper hand in certain pockets such as Iraq, which the international community should rightly condemn. However, the Arab world in general remains a place where Christians and Muslims have lived side by side for centuries, and look certain to continue doing so. Perhaps we should be celebrating this fact rather than exaggerating the extent to which the whole region is suddenly becoming anti-Christian."
Posted by Tony at 4:29 AM