UN: No change in Gaza despite easing of Israel blockade 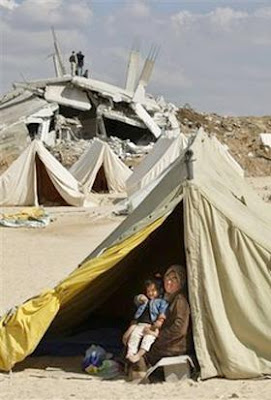 "The UN says there has been "no material change" for people in Gaza since Israel announced it was "easing" its economic blockade of the Palestinian territory.

In June Israel said it would lift some of its restrictions on Gaza to allow in more food and consumer goods.

The move followed international pressure after the deaths of nine Turkish activists aboard a flotilla of ships trying to break the blockade.

The head of UN operations in Gaza said few people had noticed any difference.

"There's been no material change for the people on the ground here in terms of their status, the aid dependency, the absence of any recovery or reconstruction, no economy," the UN's John Ging told the BBC....."
Posted by Tony at 6:32 AM