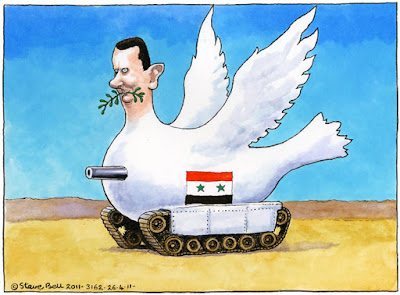 With both sides claiming violations, the UN warns that a single shot could derail its peace mission
The Independent
Friday 13 April 2012

"A fragile Syrian ceasefire teetered precariously last night as both sides reported violations and the opposition prepared for large scale demonstrations which will test the Assad regime's commitment to holding fire.

Despite widespread scepticism, a lull in violence was reported over much of the country yesterday as UN-Arab League envoy Kofi Annan's final ceasefire deadline came into force at dawn. However, there was no sign of any significant army withdrawal and activists claimed there had been several incidents of sniper fire and shelling, counting at least five dead. The government also reported breaches and said an "armed terrorist group" had targeted a military bus with a roadside bomb in Aleppo, killing one officer.

For much of the day, the streets in the opposition strongholds of Homs and Hama lay eerily quiet as the tanks that have relentlessly shelled rebel neighbourhoods fell largely silent. But the atmosphere remained tense as army snipers prevented residents from resuming any semblance of normal life, activists said. Videos posted online purporting to be from Homs, where some neighbourhoods have suffered a near-relentless three-month siege, showed army snipers patrolling rooftops. On the deserted streets below, the muzzle of a tank could be seen ominously poking out above a row of sandbags......"
Posted by Tony at 4:04 AM