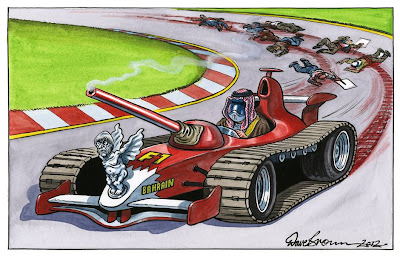 "(Beirut) – The decision to go ahead with the Grand Prix on April 22, 2012, givesBahrain’s rulers the opportunity they are seeking to obscure the seriousness of the country’s human rights situation, Human Rights Watch said today. The decision was announced on April 13 by the Federation Internationale de l’Automobile (FIA) and the Formula One Teams Association. As part of a major public relations campaign to clean up Bahrain’s image following the brutal crackdown on pro-democracy protests in 2011, the Bahraini authorities have been lobbying to have the Bahrain Grand Prix reinstated in 2012. The event was cancelled in 2011 because of political unrest. Not only is the event expected to generate significant income, but it is also being used by the Bahraini authorities to support their claim that the political and human rights crisis in the country is over.

“Formula One promoters say their decision to race in Bahrain should not be derailed by political considerations, but the ruling family will attempt to portray today's decision as a political statement of support for its repressive policies,” said Tom Porteous, deputy program director at Human Rights Watch. “The FIA has played into the government’s narrative to gloss over Bahrain’s continuing human rights crisis.”....."
Posted by Tony at 4:49 AM