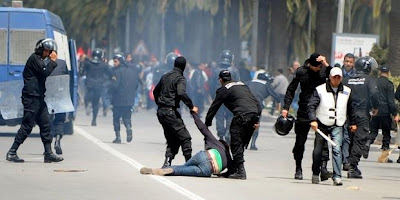 "The Tunisian authorities must investigate reports of violence by security forces against protesters in the capital yesterday and allow Tunisians to peacefully exercise their right to freedom of assembly, Amnesty International said today.

Security forces fired tear gas and used batons to disperse protesters marking Martyrs’ Day as they sought to enter Bourguiba Avenue in central Tunis on Monday, defying a 28 March decision by the Minister of Interior banning demonstrations in the area.

Scores of people were injured in the incident, including members of the security forces.

The Ministry of Interior said the demonstrations on Bourguiba Avenue were illegal.

“Imposing a sweeping ban on protests to avoid having to deal with protesters is a flagrant breach of international law. The security forces’ actions highlight the urgent need to put in place new legislation that protects the right to peaceful protest in Tunisia,” said Hassiba Hadj Sahraoui, Deputy Director of Amnesty International’s Middle East and North Africa Programme.

“As long as laws from Ben Ali’s era exist, such violations of the right to peaceful assembly will continue unabated. It is beyond belief to see the new Tunisian government not only relying on such draconian laws, but also banning protests on the very same street that became a symbol of the uprising.”

Thousands of protesters took to the streets of Tunis on Monday to commemorate those killed by the French colonial army in 1938, as well as those killed during last year’s uprising....."
Posted by Tony at 3:50 AM

You look at what has happened in Egypt since Mubarak was toppled, and now we hear about this, it just seems to say that revolutions have to be ceaseless.
If we can ever accomplish as much as the Tunisians and Egyptians were able to here with Occupy Wall Street, or anything else, we'll have to stay vigilant, at the very least. We know from the reports we've heard on Democracy Now and elsewhere that they are doing this in Egypt, but the opposition is still so powerful.