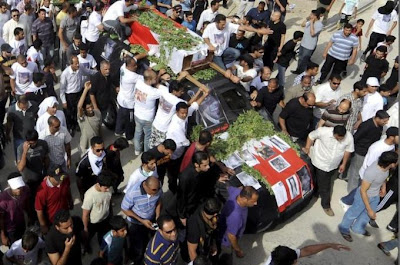 "A 15-year-old boy was shot in the chest by anti-riot police in Bahrain during a funeral procession for an activist killed last month, according to an opposition group.

Mohammed Ahmed Abdel Aziz was in intensive care and several others wounded when police fired on mourners with tear gas and live rounds, the Al-Wefaq group said on Saturday.

Thousands of people attended the funeral procession on Friday for Ahmed Ismail, 22, in Salmabad just outside the capital Manama.

Ismail was described by Al-Wefaq as a citizen journalist. His family and opposition members blamed his death on pro-government gunmen.

The latest clashes came as it was announced that the Bahrain Grand Prix Formula One race would go ahead despite continuing unrest in the Gulf Arab state.

Bahrain's main Shia opposition had called for the event to be cancelled but also urged people not to disrupt the race if it went ahead to avoid damaging their cause.

"Down with Hamad!" chanted some marchers on Friday, referring to King Hamad bin Isa Al Khalifa....."
Posted by Tony at 8:04 AM