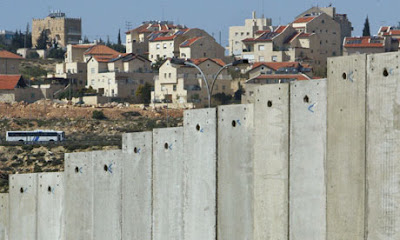 Jet2.com move follows pressure from Israel as 2,000 pro-Palestinian activists prepare to fly in on way to West Bank

"Israel has forced low-cost airline Jet2.com to cancel the tickets of three women from Manchester intending to travel to Bethlehem via Tel Aviv this weekend for a gathering of pro-Palestinian activists.

Jet2.com informed the women by email that the airline would refuse to carry them and no refund would be paid. The move follows pressure on airlines from Israel to ban known activists.

One of the women, retired nurse Norma Turner, said Jet2.com had caved in to pressure. "It never crossed my mind that Israel could stop people with British passports leaving British airports," she told the Guardian.

Israel has promised to deny entry to hundreds of activists due to arrive at Tel Aviv airport on Sunday en route to the West Bank for a week of educational and cultural activities......."
Posted by Tony at 7:18 AM

Now that's an interesting plan. The IAF is not going to shoot down planes full of political activists. And they can't board them like they could with the boats last time.