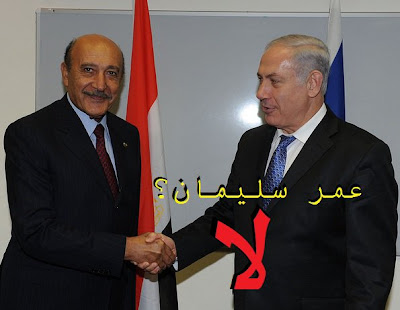 "(Reuters) - Hosni Mubarak's former intelligence chief Omar Suleiman began the application process on Saturday to enter Egypt's presidential race, while other politicians battled to keep their candidates from being disqualified on technical grounds.....

Suleiman, long viewed as the power behind his ousted boss, said overwhelming popular demand prompted his decision to become a candidate. He picked up his application papers on Saturday ahead of the Sunday deadline for their formal submission.

Like Mubarak, whose three-decade rule ended in February 2011 in a popular uprising, Suleiman has kept far from the public gaze during the past year of turbulent military rule.

Mubarak appointed Suleiman as his vice president in the dying days of his administration, one of several failed concessions to stem the revolt against poverty, corruption and draconian security control.

Suleiman's shadowy persona and his call during the revolt for protesters to go home make him anathema to the young revolutionaries pressing for a new era of accountability and transparency.

"The youth will not let Omar Suleiman become president. The revolution is still alive and we will march to Tahrir Square again if necessary," said Mohamed Fahmy, a revolutionary socialist who played a role in galvanizing last year's protests.

"The very idea that he is running is presumptuous. He should be in prison," said democracy activist and commentator Nawara Negm......

A senior FJP official said the army and Mubarak-era remnants had been bussing thousands of company employees to Cairo to provide many of the 30,000 signatures Suleiman needs to be a registered candidate.

"He is the old regime and would only run the country from a security perspective," said the FJP official, Medhat Hadad. "What kind of a revolutionary vision do you expect someone like him to have?"

Hadad said he believed the army was openly supporting Suleiman's candidacy to cast its real preferred candidate, liberal nationalist and former Arab League chief Amr Moussa, in a better light...."
Posted by Tony at 4:11 AM