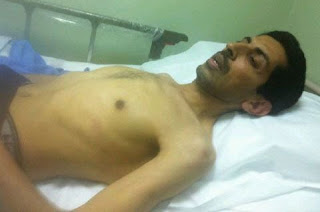 Rejects request from Copenhagen to hand over Abdulhadi al-Khawaja, who is also a Danish citizen.

"Bahrain has rejected a request to transfer to Denmark a jailed Shia activist who has been on hunger strike for two months and also holds Danish nationality, the state-run Bahrain News Agency has reported.

"The handover of accused and convicted persons to foreign countries takes place under specific conditions ... This does not apply in Abdulhadi al-Khawaja's case," a Supreme Judiciary Council official said, quoted by BNA on Sunday.

The statement did not gave any further details.

Khawaja, who was condemned with other opposition activists to life in jail over an alleged plot to topple the Sunni monarchy during a month-long protest a year ago, began his hunger strike on the night of February 8.....

Front Line Defenders, a Dublin-based non-governmental organisation, warned on Tuesday after a visit to Manama that Khawaja, who had shed 25 per cent of his body weight, could die in jail and was "at risk of organ failure"......"
Posted by Tony at 8:29 AM