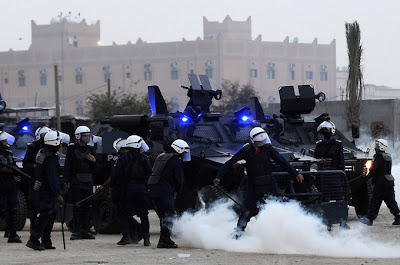 "The world's most elite professional race car drivers will head to Bahrain next week to participate in the Bahrain Grand Prix as the sport's governing body has accepted assurances from the ruling monarchy that, despite popular unrest and an ongoing protest movement, the streets will be safe for the drivers and the throngs of international spectators who will attend the race....

Human rights groups were aghast at the decision, and Amnesty International released a special brief [posted below] to expressly tell the world that "the human rights abuses are not over in Bahrain."

"Despite the authorities’ claims to the contrary, state violence against those who oppose the Al Khalifa family rule continues, and in practice, not much has changed in the country since the brutal crackdown on anti-government protesters in February and March 2011," said the statement.

The Formula One race was cancelled in 2011 after Bahraini students and pro-democracy reformers took the streets during the so-called "Arab Spring," demanding an end to the authoritarian rule of the monarchy and asking for democracy reforms. The movement has been violently suppressed, but the government's brutal crackdown has received only tepid condemnation from the United States. Bahrain has long been home to the US Navy's Fifth Fleet in the oil-rich region......"
Posted by Tony at 6:43 AM